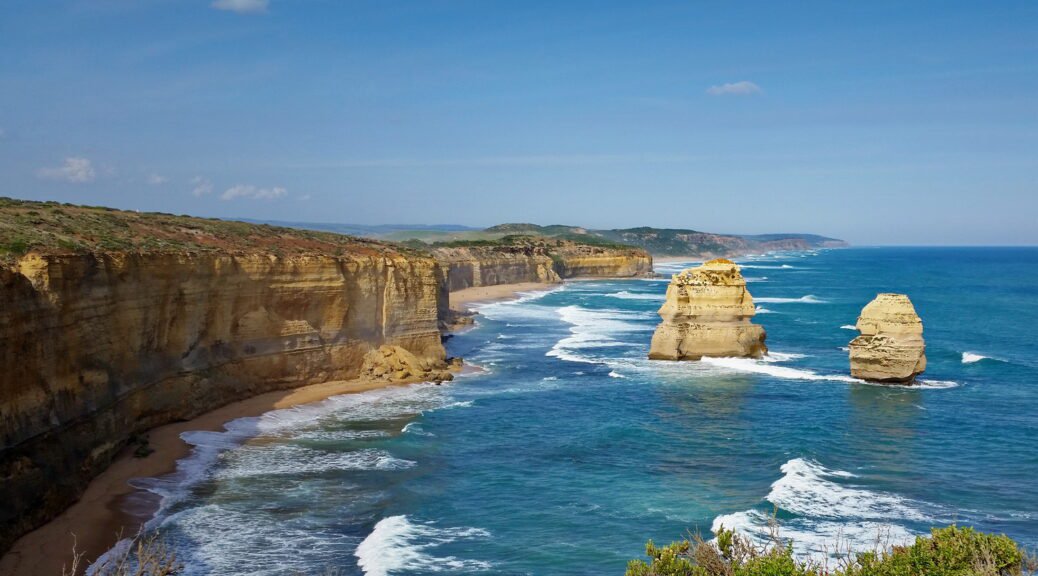 A vacation to take in the fine sights of the Great Ocean Road, plus a few days to show the boys South Australia.

This first stage was much appreciated once we got out of Melbourne and Geelong. In places the Great Ocean Road is very busy with tourists and large buses. Lorne is a popular delight and a timely stop for lunch.

A visit to the Twelve Apostles revealed that much has changed since I was there last in 1992. There is a large complex with a huge carpark and visitor centre; but oddly no cafe or souvenir shop. A number of buses had dropped off their load and the hordes of tourists made it seem busier than the streets of Melbourne.

But it’s still a beautiful place to visit.

We stopped for the night at Warrnambool and had dinner at an “all you can eat” restaurant. Food was alright, and the boys enjoyed tucking in.

Arriving at Portland gave us the chance to try out the “cable” tram. It was set up with the help of members of the Puffing Billy Society.

The trailer is originally from Melbourne and the “dummy” is a reproduction with a diesel engine rather than an underground cable to pull it along. Sitting near the engine makes for a warm ride and the vibrations are easily felt. Probably a good place to sit in cool weather.

It winds part round a football oval and along the port area (very scenic) and then goes along a normal suburban street before reaching Water Tower Museum. It would have been so much better to route the track along the top of the cliff face, but I guess there were too many expenses and objections. It’s an enjoyable experience and worth doing.

Ride the Portland Cable Tram with us

Mt Gambier and the beautiful Blue Lake. This was a favourite last time we were here. No tour down to the water pick up point this time, instead a pleasant stroll around the perimeter.

One sight not seen last time was Umpherston Sinkhole which a sink hole (due to limestone erosion) and turned into a beautiful garden. It cannot be seen from the road but there is plenty of signage pointing to a beautiful oasis which is well worth a visit.

We got a tip from a friend to visit Robe whilst in the area, and it’s beautiful. A quiet area that’s great to walk around taking in the historic buildings. Dining out is a bit limited and you could try all options in about four days. Some places are so nice dining there a few times wouldn’t be a problem.

Strathalblyn is a beautiful town with an English like public garden and there’s a beautiful church with a tower nearby. It also features an historic railway with a tourist steam service. This would be an excellent overnight stop.

Having an interest in railways the first was a favourite but I was surprised how good the maritime museum was.

Certainly larger than the NSW Rail Museum in Thirlmere Adelaide’s National Railway Museum is not as polished. The complex seems to be in a decline, there were few visitors and the café seems to have been closed for quite some time.

The National Railway Museum is a large complex and those with an interest in trains could easily spend the whole day there. A good way to quickly check out the exterior is to take a few laps on the museum’s train.

A must see for aviation lovers! Here there are many exhibits housed very efficiently in an old hangar. There’s also a flight simulator to test your skills.

Despite being housed in a small building (compared to the others) there is so much to see. A small ketch was constructed inside, built by the builders who constructed them for a living. Simply entrancing!

On the way to Hahndorf we visited the National Motor Museum at Birdwood. It has been expanded much since we were there in 1995 with more focus on Australian cars and the Australian motoring history.

The museum features many Holden cars including the fun one I got to own for a short time in my 20’s, a Holden Sandman with a huge V8 engine and a four speed manual gearbox.

It was a company car for a foreman who had recently left my father’s business. Due to it’s reputation (a “sin bin” as mum called it) I couldn’t hang onto it and ended up with a Ford Cortina.

One standout exhibit was about Tom Kruse and his outback truck service; he has an interesting story to tell about his struggle and skill needed to travel through the outback. Generous with his time and gifts he is a very popular Australian character.

The recreated car garage set in the early 1900’s was an interesting display showing how things used to be.

One final night of our holiday staying at Hahndorf overnight. Besides Adelaide this is another place where advanced bookings are a good idea. Little has changed here since we were here in 1995. A quaint main street with plenty to look at. Lunch time places were very busy.

Before leaving South Australia we had a brief stop at Coonalpyn to admire the artwork painted onto the huge wheat silos.

It’s amazing how much detail and realistic the paintings are, and how it was done on such a large scale.

One thought on “West Coast and South Australia”