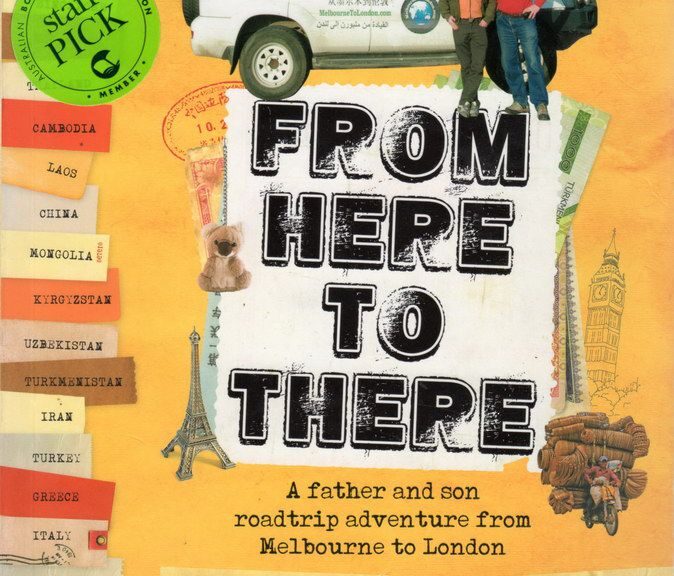 I picked this book up in Devonport, Tasmania after dinner waiting for the Spirit of Tasmania to depart for Melbourne. Next to a tree beside the footpath along the Mersey River was a plastic box left by someone as a community pop up library. Anyone could take (borrow) and leave books in the box as they pleased. I thought that it was a great idea! Although I couldn’t return a book I would “borrow” one and when finished hope to leave it for someone else in Melbourne or Eltham somewhere. I intended to read From Here to There on the ship but being an overnight passage there wasn’t as much time as I thought. So it wasn’t until after a few months after returning that I finished it.

From Here to There is the documentation of the drive taken by Jon Faine and his son Jack from Melbourne to London over a period of about six months. A vehicle is bought for the purpose, later named “Ping”; a Toyota Prado bought second-hand. The previous owner had especially set it up for long trips so it was a perfect buy. And the vehicle coped very well and rarely broke down; which is remarkable considering the tough conditions.

Jon wrote most of the text and Jack took nearly all of the photos. At first Jack’s writing style is a bit awkward compared to Jon (an experienced journalist). But after a few of Jack’s very short chapters his writing style improves remarkably and you can sense him maturing as the long trip progresses.

The photos are printed on paper that’s not much better than newspaper and the quality suffers quite a bit. The composition used in each image is generally nothing special although there are a handful of great shots.

Much of the time is spent waiting for paperwork to be processed at the border crossings. It can take from hours to days to weeks. Many times they used a guide to help them through a country. The Chinese guide restricted what they could go to and often Jon and Jack looked forward to the freedom of having no guide.

Local travel agencies and contacts were vital in helping them obtain visas for them and “Ping” which at some places was especially difficult. I suspect that Jon’s foreign media contacts (although he had to be careful not to let on he was a journalist) were vital in making the journey remotely possible.

Jon noted that it would have been easier to go from London to Melbourne as most of the embassies required are in London and not Melbourne.

It’s interesting to note that 80% of the book covers getting to Iran, and after that it’s very easy travelling. Or maybe the problems made for great reading!

Being a father and having a teenage son it was funny to read about how Jon and Jack got on. At times they were like the odd couple doing small things to annoy the other. Arguments about the music selection was a common cause. At one point Jack played John Lennon’s “Imaging” continuously to annoy his father and to make a point.

It was interesting to read how such a long trip was done and if anything it would put you off doing it yourself. Jon sometimes thought he was crazy to attempt such a long trip through difficult terrain and political situations.

Learning about and following the father and son relationship was extremely pleasing and the book ended on an uplifting note with Jon being reunited with his wife and Jack meeting up with his friends in London.