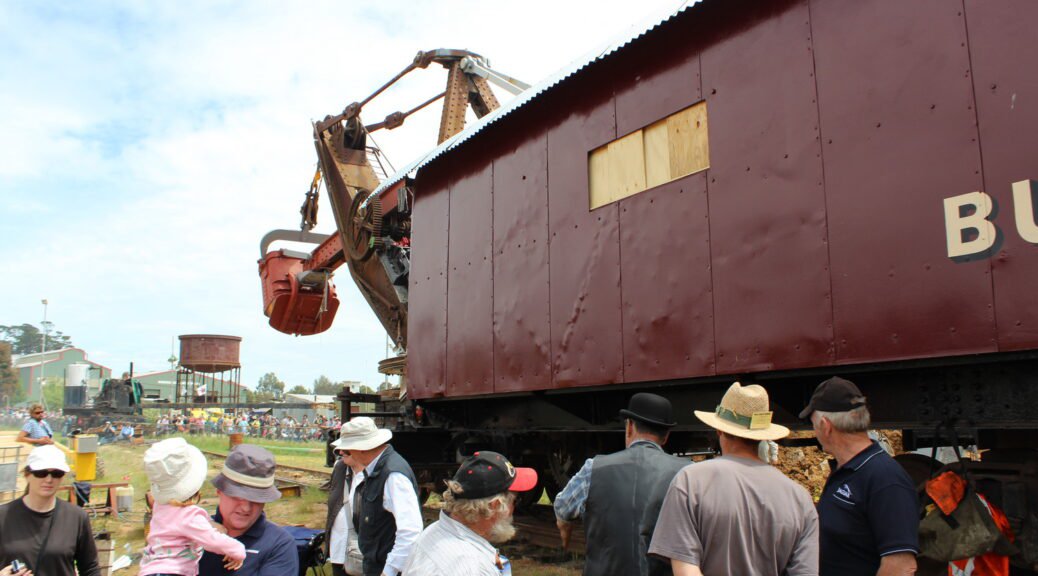 A nice example of Dad’s old tractor used at Upper Beaconsfield. Ours had a car seat fitted and had a tendency to buck the operator out over bumpy ground. It kept losing parts off it earning it the nickname Guzula, from a cartoon character that liked eating metal. Dad had fitted a front bulldozer blade and this added to the parts being lost. But most of the time it worked very well. More information.

Ruston Proctor Showman’s Engine These machines were used primarily for carnivals and circus. The generator is mounted in a much more elegant way compared to the engine here.100th Lake Goldsmith Steam Rally.

A fully operational sawmill, traction engine powered. The saw to the left rips the logs from end to end. The machine on the right puts a straight edge on each log slice to make a nice squared ended usable piece of lumber.100th Lake Goldsmith Steam Rally.

The National Trust Victoria has also registered the steam shovel. It was one of the first to be imported into Australia as part of an increase in mining activity, and mechanisation of mining. It is one of only a few examples in the world made by one of the largest suppliers of this type of shovel, the Bucyrus Company, Milwaukee, USA, which supplied the majority of the shovels used on the Panama Canal.

It is the only example of its type in Australia, and the only known example outside America.

Well done to the Lake Goldsmith team for getting Bucyrus from rust to operational in a short two and a half years. The steam shovel’s journey to Lake Goldsmith

Steam boat for sale. It was tempting at $10000, but it would need a large car to tow it and the expertise needed to operate the steam engine would be difficult to come by. This image was overexposed due to not putting the camera back to automatic after setting up for the dark shed interiors.

No. 4 Face Shovel was built by Ruston Hornsby of Lincoln, England and tops the scales at 90 tons. The Australian Portland Cement Company Limited imported the unit in 1923 to work in their Fyansford (Geelong) Quarry and worked there until 1958. 100th Lake Goldsmith Steam Rally. November 2012.

The demonstration involved moving dirt from one pile to another. The digging power is limited to the weight of the bucket and support structure. The engine on the boom only lifts the bucket. Modern excavators use hydraulics to push down using the entire weight of the machine.

The demonstration involved moving dirt from one pile to another. The digging power is limited to the weight of the bucket and support structure. The engine on the boom only lifts the bucket. Modern excavators use hydraulics to push down using the entire weight of the machine.