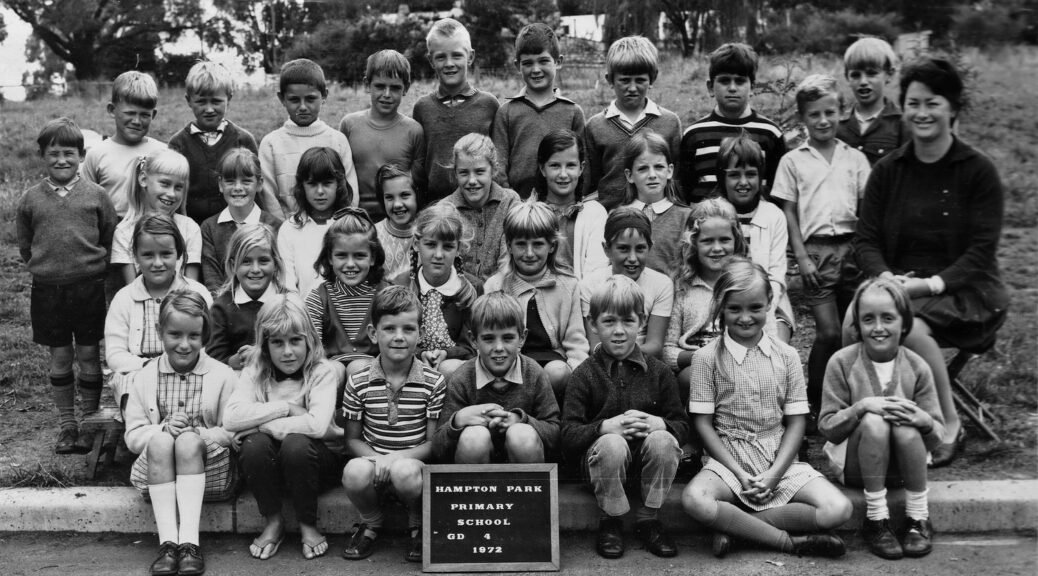 Class photos from prep to Form 2 (year 8). After Form 2 I moved to Haileybury College and the only class photos you got is the entire “house” photo, consisting of about 100 students , published in the end of year school magazine. Your face ends up being a few printed dots!

If you know any of the unknown names in the photos please let me know at my email address and I will update the information.

The beginning of my education, Hampton Park Primary School.

This was to be my last year at Hampton Park Primary School. And it was with the best teacher, Mr Ray Heathcote; who is now the Berwick RSL President.

My first and last year at Beaconsfield Upper Primary School. This was a bit hard as I had left all of my friends at Hampton Park and had to make new ones. The teacher, Mr Atkins tended to favour the girls and was not a patch on Mr H!

The move away from primary school to “big” school at Pakenham High School. As it still is, it’s a significant change in the students you attend with and how the classes are run. Instead of one teacher for the year there’s one for each subject. About half of the students were from Beaconsfield Upper Primary, the rest came from schools in Pakenham itself.

I was put into Henty house, another new concept to experience. Houses were mainly used for sports competitions and out of class teacher assistance and guidance for students.

Thanks to Ben Easton for some of the names.

1976 and the school photos are now in colour, although not as sharp as the monochrome photos. One of the few improvements in the education system.

After a number of prolonged teacher strikes and other education deficiencies in 1977 I began Year 9 at Haileybury College in Keysborough, a large but a relatively new private school.

Very different to Pakenham High, Haileybury College was a culture shock. There were no girls and lots of discipline, including keeping your uniform smart and clean. No untidy neck ties or hair cuts were allowed. The only other student I knew was Jeff Crawford who came along a few months after I started.

The care and attention showed by the teachers to their students and subject material was significantly better than in the public school system. I recall at Pakenham High at one French class the teacher simply sat down and told us to do private study for the entire lesson, when he was supposed to be teaching.

And the amenities were much better. Haileybury had an outdoor swimming pool some 25m long (I think). Although in the cooler weather you wished they didn’t have one.

Haileybury did take student photos, but they were of your entire “house” photo, consisting of about 100 students , published in the end of year school magazine. Your face ends up being a few printed dots. I was put in Sholto Black house; which house you get allocated to depends on where you live.

The only photos I have found so far from the time at Haileybury are from a class excursion to Sovereign Hill in Ballarat.