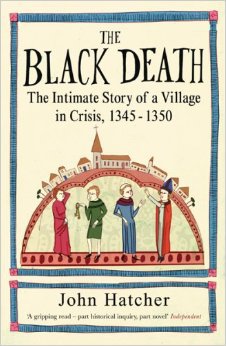 This book takes the reader back to the dark period of The Black Death.

It is an historical novel which is based on real people using the records dating back from the period. You learn the differences and also appreciate the similarities as well comparing medieval to modern life. It was a fascinating read.

Religion and the Plague

The priests use religion extensively to attempt cure the pestilence and the light of what we know about microbes it was a completely futile exercise. Such was the desperation of the villagers. The silver lining to the dark clouds of the plague was with the loss of so many workers. Those remaining could negotiate better conditions and pay in very much the same way as in the modern era of unionism.

There are lots of references to religion and not being real interested I tended to skim read those bits. There are many unusual words and I found myself referring to the dictionary quite often, but being an Australian one sometimes it was of no use.

The religious rituals are described in quite a bit of detail and there I found some great words for use in Scrabble; like “pyx” for example, which means the container in which the consecrated bread of the Eucharist is kept.

Several characters (based on real people) give the story personality. They range from Master John the ever inspiring church priest to the exploitative Lady Rose.

The sudden shortage of workers has a major impact. Wages increase dramatically and the gentry are resistant to the point of being impractical to the changes. Even King Edward tries to decree that no one shall be paid more than before, but it’s pretty much ignored.

Lady Rose tried to install stocks for those who demanded more wages, but the carpenters would not accept her low pay!

It’s not just less workers, every level of society is hit. The church struggles to find extra priests to handle the workload of helping people deal with the crisis; despite the parish population being halved.

This was learning about history in an educational and engaging way. You really get to know the characters well and you feel for them. Well worth reading, especially for those who love historic novels.