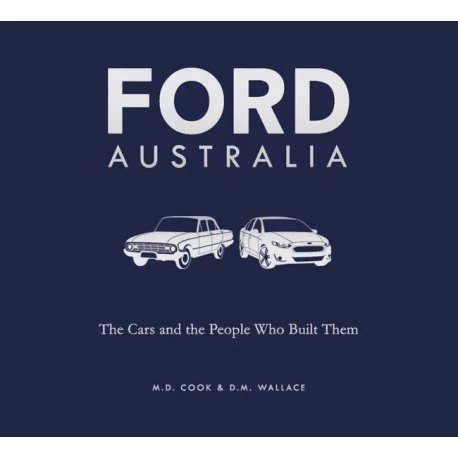 After reading about Holden’s history I was happy to see one about Ford in Australia as well.

The book is very well researched and illustrated with many photos. It would have been good to see more about the manufacturing process and some of the heavy machinery used, but it’s possible that being every day scenes no one bothered recording their existence.

And Ford have been around in Australia for a long time, the first Ford car arriving in 1904. About twenty years later local manufacturing began in Geelong, but mainly as CKD (Completely Knocked Down) kits imported for local assembly. Once more equipment arrived more of the car building process could be built at Geelong.

Not only did they make cars but also in 1941 armoured vehicles, patrol boats, cargo ships and sea mines.

Every car from the first Model T to the 2016 FGX Falcon XR8 is covered, but there’s not much information for my Ford Cortina Mark IV.

Car and engine development is well covered which left me with the impression that Ford engines were more efficient (due to some clever but simple porting in the head) and more advanced than the Holden ones.

Economics affect car companies significantly and they are also sensitive to changes in Government policy. The most significant change was in tariffs for overseas made vehicles coming into Australia. The rate was 59% and John Button had the intention of slowly bringing it down to 25%. However successive governments took it 5% and then 0%, something that was never intended at the start.

During this time, to their credit, Ford was making progress with getting the work force to be more productive through building understanding between management and the workers. The productivity gains were not enough.

With Australia’s small population and remoteness building cars wasn’t viable, in fact some vehicles were costing manufacturers money to export them. So with unfavourable winds Ford, along with all other car manufacturers shut down manufacturing in Australia. Now Australia has no car industry or the means to make significant military equipment.

An excellent book which goes into much detail about Ford and also the car development and the surrounding politics and economic history that affects car companies. I particularly liked the small panels which talked about interesting individuals within Ford, they gave a real personal touch to the history of Ford.