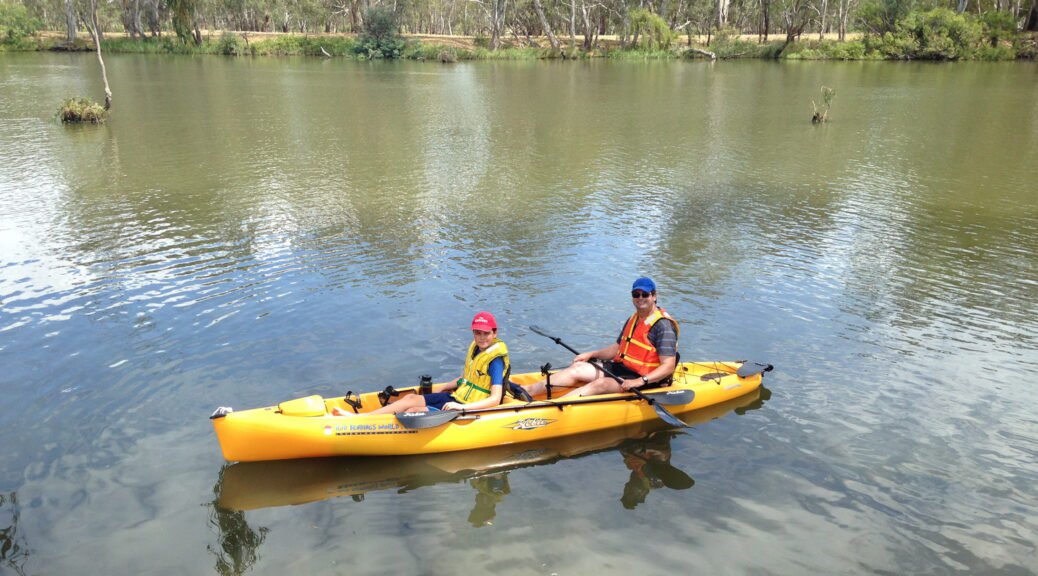 After the Inverloch holiday house was sold we lost easy access to our Christmas and summer holiday destination.

We heard about Nagambie from the seller of a small caravan we were inspecting in Eltham. On the way to a long weekend in June at Echuca we decided to pull off the freeway and have a look.

What we found was a magical looking place that would be ideal for relaxing and with plenty of waterways an excellent place to go kayaking. We didn’t hesitate to book the minimum week stay starting in early January.

January arrived and so did we in Nagambie with the car full of luggage and the kayak on top.

The park was a lot busier than it was in June! The tradies were on a well earned break and there were children everywhere ; and the Goulburn River had noisy boats and even worse, personal water craft going up and down the river continuously. At dusk I saw one boat circling a lake island with music and engine blaring which must be the water equivalent of a car hoon going up and down Chapel Street.

First was a look around town. Quite a few nice old buildings and a couple of places to eat out so you aren’t spoilt for choice. The railway precinct was interesting to look at. We didn’t see any trains but often at night you could hear them in the distance.

The whole area, even all the way to the wineries and weir, is fairly flat and it would be great for cycling. The walk that goes partially around the lake makes for a nice evening stroll.

Nagambie Lakes Leisure Park is simply beautiful, with water winding its way around the park it is something we have never seen or stayed in before. It was handy being able to leave the kayak on the river shore ready for another paddle down Goulburn River or maybe a trip around Lake Nagambie.

The beauty was spoilt by a manager with a bad attitude, most likely the owner’s wife as a hired manager wouldn’t last. Over zealous with who came in the park she once yelled out to us from the office as we were returning from looking at the regatta. She thought we were non-guests coming in to use the pool.

While the cabin was nice the floor was dirty and it needed a good sweep to remove the sandy feeling on bare feet. At over $250 a night the boys’ bunk bedding wasn’t included; a fact which wasn’t obvious from the information sent to us. After much fuss the manager reluctantly got us some bedding. In contrast the cabin accommodation in Beechworth provided all bedding at almost half the cost.

Nagambie’s best feature are it’s waterways which are simply beautiful and being away from the dangerous boat traffic are ideal for kayaking. Power boats too are excellent here and it’s possible to reach the Goulburn Weir or by going south the Tahbilk and Mitchelton wineries can be reached.

Behind Goulburn River and Heaths Island is a bit of wilderness that is beautiful and is ideal for kayaking.

Tahbilk is a beautiful old winery with a winding river and some lovely walks you can take along the river’s edge; it even had an old steam engine! The café was tasty stop for lunch.

The modern design of Mitchelton Winery with it’s distinctive tower at the centre of the complex is well worth visiting. There is also a restaurant (quite an up market one) and a chocolate shop.

Another point of interest, even if a bit away from Nagambie is to inspect the Goulburn Weir. The dam and lake is part of the Goulburn Irrigation System. The weir was completed in 1891 and it was one of the first hydro electric plants in the southern hemisphere. The power was used to move the water gates.

Nagambie is a wonderful place for a break and it’s only just over an hour’s drive from Melbourne. For owner’s of boats, kayaks and bicycles it’s a great place to enjoy your toys.

I think it would be better to go after mid January when the crowds and their kids have gone unless you like the busy atmosphere they provide. Going later on means not having to stay a whole week which we found to be about three or four days too long. Ideally go for a long weekend and then there’s more than enough to see and do.

One thought on “Nagambie ”